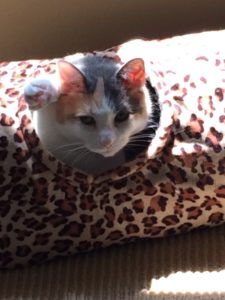 This is Pumpkin. She’s a beautiful five year old calico who is as sweet as her name. She was rescued her from the Anti-Cruelty Society in Chicago in 2012 where she had been adopted as a kitten and returned 2 years later. We simply don’t understand why because she is such a sweetie kitty. When she met her new owner, she crawled into her lap and just purred and purred — it was kismet.

She was overweight when she was adopted, but she is now a svelte 10 lbs. She loves Dr. Fanous so much she even lets him hold her, which is not something she usually allows.

Pumpkin has several nicknames, including Doodle and Doodle Pants. She loves her cat tree and the top of her fridge, but her favorite spots are in her patio bed and her tunnel. Her hobbies include chasing her sister Olivia and sneaking her food, along with long naps, lounging on the patio, indoor soccer and kitty yoga.

Font Resize
Contrast
Accessibility by WAH
Call Us Text Us